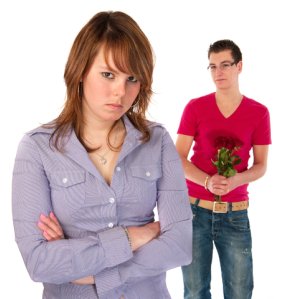 Most guys think the perfect answer, after a breakup, is to apologize to the girl who got away. Some of them have a hard time understanding why this doesn’t work – or in some cases makes her even angrier than she was initially. Apologizing is almost always the wrong answer. Here are just a few of the reasons why.

Fans of the hit television show on CBS have heard this a time or two throughout its many seasons on the air. It’s one of Gibbs’ favorite sayings. But, it is a sign of being on the weak end of the argument. You never want to broach an argument from a weaker position.

Apologies Come Across as Insincere

Chances are good that you’ve apologized in the past. Perhaps, you’ve even apologized for the very things she says are the problems in your relationship. Apologies, without action, do not bring about a sufficient result to make her happy. While you don’t have to change everything about who you are, sometimes, you’re going to have to make some adjustments to your nature in order to keep her happy and make her FEEL loved by you.

Apologizing for “whatever you did to make her leave” isn’t going to cut it. She needs to hear the specific reason why you’re apologizing. She wants you to acknowledge that you’ve hurt, neglected, ignored, cheated, or whatever it is that you’ve done. She wants to know that you understand it’s wrong. Problem is, she doesn’t always tell you what you did. Which leads to the next reason it’s a bad idea to apologize when your girlfriend leaves.

It’s Too Easy to Apologize for the Wrong Thing

The last thing you want to do is add fuel to the fire by apologizing for something you think she found out about, while failing to apologize to the thing that’s really set her off. Talk about digging in deeper! The bottom line, when it comes to apologies, is that there are many more ways to get it wrong than there are to get it right. If you feel you must apologize, it’s best to do it in writing and follow these simple rules.

Putting it in writing prevents a fight, gives her time to think it over, and provides a neutral setting where she can process the apology and what it may mean for your collective futures. Apologies, for the most part, have a negative impact on the future of the relationship. Instead of a apologizing, look for positive aspects of the relationship and attempt to capitalize on how good you were together rather than revisiting mistakes that were made.